And great mystery: to redeem our brokenness and lovelessness the God who suffers with us did not strike some mighty blow of power but sent his beloved son to suffer like us, through his suffering to redeem us from suffering and evil.

-Nicholas Wolterstorff, prominent philosophical theologian in his book Lament for a Son

Growing up in the largely Catholicized Philippines gave me many opportunities to see crucifixes in rather odd places.  Little shops in the marketplace would have a Santo Nino doll, hands outstretched in blessing, and next to it would be a cross with Jesus twisted in pain.  The way I remember it, there were crucifixes everywhere.  They were usually rather large, almost always made of plastic, and were somehow battery powered so that little candles would flicker in front of them.  Sometimes they looked rather creepy.

Being Protestants, we didn't have Jesus hanging on any cross in our home or at church.  Any crosses our churches featured would be rather bright, angular, and... empty.  The way my mom explained it was that we like to remember Jesus as he is now, glorified and seated at the right hand of the Father.  And that made sense.

In Revelation chapter 5, the apostle John is weeping and weeping because no one has been found worthy enough to open the sacred scroll and break open its seals.  One of the elders comforts him,


"Do not weep!  See, the Lion of the tribe of Judah, the Root of David, has triumphed.  He is able to open the scroll and its seven seals.  Then I saw a Lamb, looking as if it had been slain, standing at the center of the throne, encircled by the four living creatures and the elders."

This is a really apocalyptic passage (one of the reasons I don't read this book as often as it deserves!) John is told here that the Lion of the tribe of Judah (In my opinion one of the more glorious names of Jesus) has triumphed and therefore only He can open the sacred scroll which John wants opened so badly.  And when John looks up to see this magnificent person, what does he see?  A triumphant King appearing like a mighty Lion?  A glorious Being of beauteous light?  No, John sees something weak, something bloodied, something vulnerable.

Christ in his glorious triumph comes as a lamb.  A lamb that looks like it has been slain.  That's not very sexy or powerful or even attractive, is it?

The prolific 19th century preacher C. H. Spurgeon said this in one of his sermons entitled "The Wounds of Jesus,"


"We may talk of Christ in his beauty, raising the dead and stilling the tempest, but oh! there never was such a matchless Christ as he that did hang upon the cross.  There I behold all his beauties, all his attributes developed, all his love drawn out, all his character expressed in letters so legible as I see them written in crimson upon the bloody tree.  Beloved, these are to Jesus what they are to us; they are his ornaments, his royal jewels, his fair array." 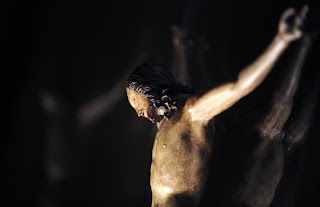 Don't mind me, I'm just going to wait here a while, looking at the glorious wounds of Jesus.
Posted by Rebecca at 10:35 AM

Email ThisBlogThis!Share to TwitterShare to FacebookShare to Pinterest
Labels: glorified Christ, man of sorrows, theology of suffering, wounds of Jesus

When we could not conceived, I was reading everything about barrenness in the bible. I became quite an expert in that field !...I think where your hurts are, they will become your area of expertise..meaning you can comfort and be in that place with people going through great suffering..you understood.. because you were there..and bring healing to those who are hurt.
In His perfect time, you will do GREAT THINGS for God! Keep going! - LP

Great stuff, Bird. The cross is not merely victory over suffering, but triumph and redemption through it.

Brilliant use of Wolterstorff and Spurgeon, I might add.

Such good words. Your post made me think of Thomas, who wouldn't believe Jesus was alive until he saw Christ's wounds. I know I am sometimes afraid of the idea of a suffering God, but in this torn asunder world how much we need to look up and see Jesus, ripped apart with the wounds of this world. Thanks for this.

Oh, but you have seen Jesus face to face and lived those very few precious moments with Him as Mary did. You bore him for nine months and despite the odds, you brought him to this world and what joy he brought you! How it pierced your heart when told that this boy is set for the fall and rising again of many...that the thoughts of many hearts may be revealed.

You watched him grow in grace and in purity of the knowledge of God and wondered how God could manifest His perfection of beauty in such a frail body. And how you loved him!

Yes, as Mary, you pondered all these things in your heart while time and again the piercings never end as you watched in horror how your beloved son writhe in pain, distort his face in agony, and twist his body to wring every ounce of blood out from him that many times you had to look away because it was just too much to bare. Do you remember how it grew dark around you when you did? The Father looked away too!

You beheld your son dying a slow and most agonizing death, just like Mary did who never took her eyes off his as light slowly left them.
The words in your cries when he was gone interpreted, "Why did it had to be my son?"

Would you have wanted your son to suffer a second more? Let his blood keep flowing some more? Water was the only thing left flowing from his body as he gave his all.

You held the lamb of God in your arms just like Mary did with her own after his son was lowered down from the cross.

Has the piercings stopped in Mary's heart after the cross? Was it such a great comfort to her to see a mighty church flourish in her son's name to compensate for the loss? You alone share in the ponderings of her heart. You know, because you are that Mary.

Thanks Ev! My spiritual director told me (in a flash of brilliance, I might add!) to look at Mary when practicing Lectio Divina. That I may get some insight, some comfort from her as she saw Jesus dying on the cross, and then afterwards, as she continued with the rest of the believers. I think that as a wounded mom, Mary is a great biblical character to look to for insight!

Newer Post Older Post Home
Subscribe to: Post Comments (Atom)
If you find yourself here, you're probably walking your own journey of grief. I'm so sorry that you're here but also glad that we've found each other. After all, we need not walk alone through the valley of the shadow.
This blog is basically a grief journal, a way to get my grief on as I mourn the loss of my son. Hopefully it will help you navigate your own pain as well. Welcome to the process!